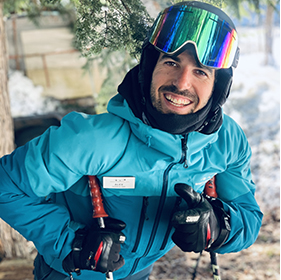 When not on the slopes you will find him riding his snowmobile in the deepest snow!

Alex was born in the north of Spain surrounded by mountains, which were always his passion. Since he was little he loved skiing and he always knew that his dream would be dedicating to it. After completing his training in Baqueira, when he was 20 he made his debut as an instructor in Cerler and since then he has been linking seasons and continuing his training in Switzerland, Italy, Argentina, Spain and France.

It was in 2014 when he decided that he wanted to try Canada. Since then, Whistler has been his last destination and has become his home.

Today he is certified by the International Association of Ski Instructors (ISIA) at its highest level and the 2022/2023 season will be his 19th as an instructor.